If I could have categories of best friends, Darlene Campos would without a doubt be my best “writer” friend. 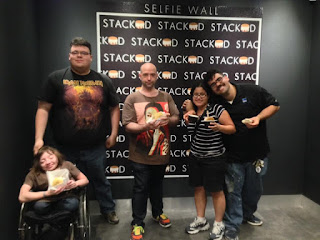 Before meeting Darlene, my only sister had died, and I had been very sick. She was a sister I needed. She didn’t replace mine, rather became another one.

My friend, Darlene, just got married to David Alcala, who is always smiling and ready with a joke. He has a heart of gold. So does she. Together, their laughs will shine from the effulgence: Fact.


Unfortunately, I couldn’t make it to their wedding due to living far away in Southern Japan, and missed the dinosaurs and excitement.

I wanted to go all out in lieu and post this special blog about her awesome debut novel: Behind Mount Rushmore, which you should read and review immediately.

As an extra gift, I did what every writer should do for their fellow author:

Do you like to read books by authors that clearly work hard on the pages before you, know how to edit, and are highly educated in creative writing?

Try Behind Mount Rushmore, a debut novel by Darlene Campos.
Campos has been through higher education, graduating from the University of Houston's creative writing program and beyond. She helps other authors daily, teaches, and is well-known in the short story community.

A lover of indigenous American writing, she had a simple dream to meet her hero, Sherman Alexie. 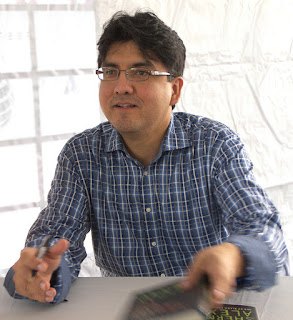 This dream came true for her through hard work. (If only she'd write a non-fiction piece about the time she met Alexie, so the world could feel the moment with her). You can read her interview mentioning the encounter here:
INTERVIEW

Yet, that has little to do with Behind Mount Rushmore. Only parts of its inspiration.

It is a professionally written and fun book. Zoomed through, yet there were some really memorable moments that captured me into the pages, which will stay in my mind forever. I'm honored to have a signed copy of her debut novel. 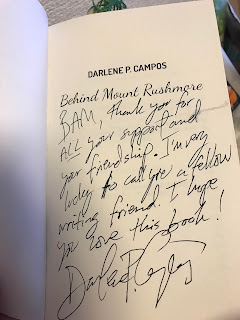 There are so many great moments in the book. My favorite chapter is "Vacation."

A lady asked the main characters, indigenous Americans, how big their teepee was just because of their nationality. This foreshadows an incident later in the chapter. The issue of bigotry is smoothly touched upon, and how it hurts families too. The way it’s dealt with is unique, imaginative, and relatable. I especially loved what Josie told Nimo in the end of the chapter about how to really look at a person. It's not too preachy, rather tear-jerklingly sincere.

Nimo is an interesting character: Football quarterback, passionate about books and a writer while a bit sensitive. He’s an imperfect character, yet fun to grow alongside as you read.

In this story, you will get Campos' very best work, and see firsthand an example of a person dedicated to the written word. So, take a break from your computer screen for a few hours, open a hardcopy of Behind Mount Rushmore, and enjoy the read.

BAM: Darlene Campos, give us a brief first-person bio.

Darlene Campos: I'm a writer who's trying to make my way in the literature world without leaving fellow writers behind. Some might say that's dumb, but I don't really care.

BAM: What’s the greatest accomplishment in your writing career?

DC: I've won prizes for my stories and I've been nominated for a Best of the Net Award. However, the biggest accomplishment for me is when I get an email from a reader. I had one who emailed me just to say, "I loved your story." Prizes and awards are nice (especially when they include cash), but hearing from a reader is priceless.

BAM: The relationship of child and parent comes up in your works, particularly that of the father / child dynamic. What inspired this continuous prompt?

DC: This is a question I receive often, and I do have an answer! My dad certainly wasn't Father of the Year when I was growing up. He did and said a lot of horrible things, not just to me, but also to people I care about. When you're not happy in the real world, writing is a way to create your own happy world. This is why I 'make up' good fathers. Just because I didn't have the best dad, it doesn't mean I can't have one in my fictional world.

BAM: You’re on an island, no Wi-Fi of course, what are three items you take with you, why?

DC: That's easy - I'd take a notebook, pen, and toilet paper. I would say my boyfriend David, but I don't think he's considered an item. Or maybe he is -wink, wink.

DC: I just finished reading, "The Glass Castle," by Jeannette Walls. It's a memoir of Walls' childhood and the early parts of her adulthood. It was so well written, I finished it in two days.

BAM: What’s the greatest lesson you’ve learned as a writer?

DC: Never, ever put another writer down. We all have writer's block, we all write stories/poems/essays that suck more than a vacuum cleaner. There is absolutely no reason to be a snob.

BAM: If you could win one award in writing, which would it be?

DC: That would be the Flannery O'Connor Award for Short Fiction. O'Connor has been a major influence for me and to have her name attached to mine would truly be an honor.

BAM: Who inspires you the most, why?

DC: Even though I haven't read much of his work, Stephen King is a writer to look up to. He's been writing since he was a small boy and he never, ever quit, even though he sometimes really wanted to, which is understandable for new writers. I have a sticky note above my work station with the number of rejections Stephen King received for "Carrie." That little sticky note keeps me going.

BAM: Where do you write? Does location matter?

DC: I usually write in my bedroom with the door closed and a pair of earphones on. I can't focus unless I'm totally alone, but there have been, though very few times, when I have written something in public. My award-winning story, "The Fork," was written in multiple places. I started and finished it in the comfort of my bed, but the middle parts were written in a doctor's waiting room, during a timed break between my college classes, and in my car (while I was parked, of course!).

BAM: Why do you write?

DC: It's a part of me now. I take breaks from writing to recharge, but the breaks don't last very long.

BAM: If you could sit with any author, living or deceased, who and why?

DC: I've already had the opportunity to sit with my favorite living author, Sherman Alexie, so I chose Oscar Wilde. He was the king of wit!

BAM: When searching for writing prompts, do any objects or people inspire you? Explain.

DC: That depends. Sometimes when a person is really ticking me off, I think "that's it, you're going in a story and you're going to die in it." As for objects, it's an elegant notebook and a smooth ink pen that gets me writing.

BAM: Do you feel your lineage carries over into your writing, how so?

DC: Most certainly! Several of my characters are heavily based on my family members. Some of them will figure that out sooner or later.

BAM: If you could give one piece of advice to every would-be writer, what would you tell her or him?

DC: Linguistic - it flows on the tongue so well.

BAM: What makes you laugh?

DC: My life. If I couldn't laugh at myself, I would be miserable. I've fallen going up the stairs, pulled a door that said 'push,' and fallen asleep at inappropriate times (apologies to my previous professors!). I've also spent a significant amount of time looking for my cell phone only to realize it was in my hand.

DC: Rock! There's no question about it.

DC: Gum. I've choked on many mints before.

BAM: Thanks for your answers! Hope to see more of your work soon.